Studying Generation A+ in the Digital Media Lab: 10 weeks with 10-year olds

I’m not sure you’ve got such a good headline when you have to start a post by explaining its title.

I’ll make an exception this time, because this is NOT just a post: I’m starting a blog series on my adventures trying to study how a group of 10/11-year olds use digital devices, media and technologies.

Generation A+ is a term I first mentioned on this blog earlier this year.

I didn’t come up with the term by myself. My 9-year old did after I explained I was from Generation X, the Millenials were called Generation Y and the members of Generation Z were starting to go to college.

Getting the vibe for the alphabetical pattern, my son declared his generation should be called Generation A+ – and so I went on with it :-) 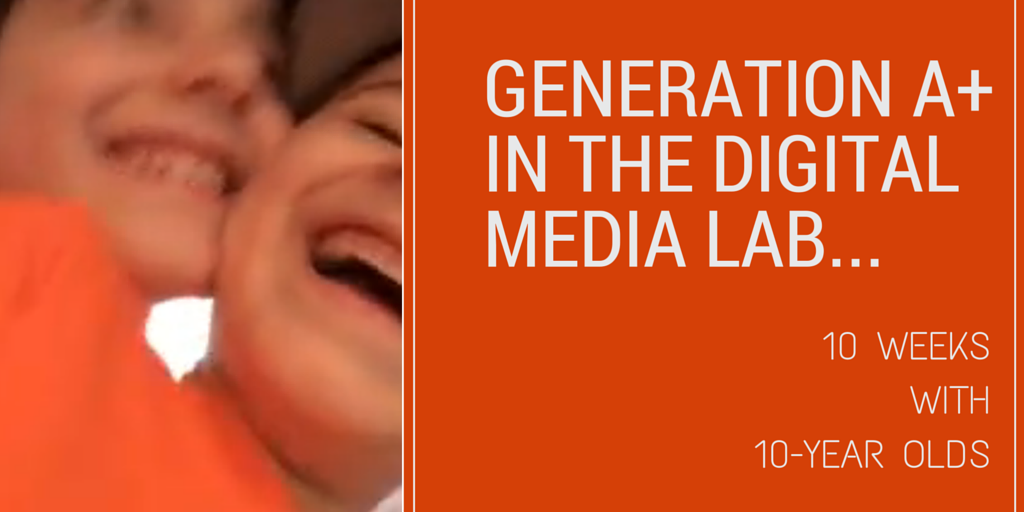 Why 10 weeks in the Digital Media Lab with 10-year olds?

This fall I’ve decided to shake things up a little and get out of my comfort zone: higher ed marketing and professional development for working adults.

I’m scheduled to run a 10-week digital media lab with a small group of 10 & 11-year olds. It’s not a course, but an extracurricular activity at a local elementary school.

I decided to approach the school director last Spring with the offer: I would volunteer my time and expertise to lead this free after-school activity to try to show kids how to create “stuff” online instead of just consuming “stuff.”

She was interested. So, we met again after the first week of school and I explained a bit further what I wanted to do. We picked a day of the week and opened registrations for my own little digital lab.

We met last week (I wanted to run this post by the kids first — at our 2nd meeting) for the first time in the library where the computers are located. My group is composed of 9 kids (even if the activity is free and use tech, it actually didn’t sell out) – mainly boys with only 2 girls.

Due to space limitation on the activity flyer that was sent and filled out by parents, the digital media lab got labeled “Website Creation.” I don’t know if this had an impact on the girl/boy ratio — and frankly hope it didn’t, but we’ll see.

I plan to chronicle my experience – while keeping some details out to keep the privacy of the kids – so we can hopefully all learn a bit more on how these true Digital Natives see and interact with technology.

Obviously, this is NOT an academic research project. I only plan to share interesting points I observe while preparing for and giving this workshop.

Time permitting, you can expect a quick weekly update from this digital media lab.

So, let’s start with what I’ve learned after getting ready and leading the 1st meeting!

They love to use mobile devices and do many things on them.

All the kids in my group have access at home to computers, tablets or/and iPods. Nobody mentioned a smartphone though.

At the school they attend, they have access to computers as well as iPads teachers can use for special class activities. This school doesn’t provide or require a tablet or a computer per kid as some elementary schools have started to do.

While most kids in my group reported watching videos as one of the things they do online, I was also able to see the power of videos in action during the workshop.

I played a YouTube 3-min video explaining how websites work and it grabbed their attention in no time. We had some issue playing the video with the audio on their desktops, so I ended up using my iPad (I’m not yet well-versed in the use of smartboards but will definitely need to catch up as we have one in the library).

I asked them to gather around and held the iPad in front of me so everybody could see and listen to the video. This set-up ended up giving a great view of their faces as they watched this 3-min video.

The video captured the attention of most and they all looked interested by a talk about servers, files and HTML.

All the kids in my group have used touch devices (iPods, iPads, Android Phones or Tablets) since they were very young. We didn’t use iPads in our first meeting yesterday, but we will next week.

However, I’ve already seen some kids (mine included) using these devices and it’s flawless: they go from one app to the other and can finger their way to almost any tasks on these devices.

In front of a computer, things seem a little less easy for the kids. Some closed windows they didn’t want to close, others had trouble finding a menu item or a button on a given web page.

I had prepared in advance a few questions for them to find out what they wanted to do in our upcoming sessions. And, when it came to open ended questions where they had to type their answers, I realized how typing on a keyboard could be a challenge.

That’s probably something you’ve already noticed, but I’m so used to teaching and interacting with working adults that this is something I missed when I prepared my first â€œclass.â€

I believe there is also another take-away for web designers and digital professionals targeting younger users: the haptic mobile device has become the default (or at least the 1st) device for this demographic.

That’s why the mobile first approach might make a lot of sense to help them find their ways on websites even when they browse on a desktop.

Coming up next week: HTML, iPads and More!

In Week 2, the plan was to show them a bit of HTML – so they get an idea of what’s under the hood of websites.

I’ll share what happened in this session next Friday.

In the meantime, I’d love to get feedback from you (ideas and suggestions are also welcome) about this little experiment.