Periscope in #highered: Campus tours at @MIT and @UWMadison [VIDEOS]

In my previous post about Periscope for colleges and universities, I discussed the reasons why it’s probably too early to invest too much time on Periscope, but it’s still important to play with it.

Then, I promised I would share 2 interesting examples of smart use of this new platform by institutions of higher education. So, that’s what THIS post is all about. 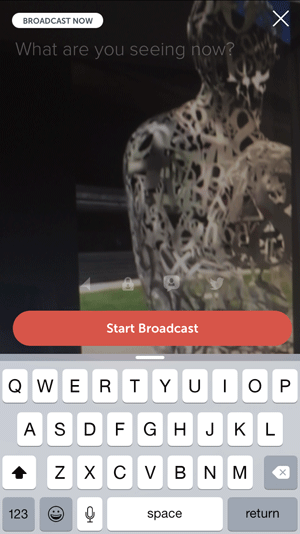 In the 2015 RNL E-Expectations survey of college-bound high school juniors (the ones you’re starting to recruit), 56% selected “virtual campus tour” as a topic of interest for an online video or online meeting.

On the college admissions end of the spectrum, we know campus visits are a good signal of a strong(er) interest for an institution – a very good early key performance indicator for your yield among the students you admit.

While I don’t see ‘Scopes as a substitute for campus tours, the live streamed campus tours could act as a low-barrier teaser to get prospects interested in exploring further.

With a call to action to get more information about a campus visit or schedule one, a tour on Periscope (or any live virtual tours using other platforms) could be a step in the right direction.

I haven’t spent 24/7 on Periscope to monitor what universities and colleges do on this platform. This would be a full-time job.

However, I was lucky enough to stumble upon very interesting examples of campus mini-tours from MIT and UW-Madison.

A beautiful day at MIT: impromptu and experimental tour

I found out about this Periscope tour on Twitter.

It was done by Stephanie Leishman, Social Media Strategist at MIT and Emer Garland. I follow Stephanie on Twitter, because she is smart, super savvy, driven and still manages to be one of the kindest people I had the pleasure to meet on Twitter.

When I reached out to Stephanie to ask permission to share an excerpt of her tour, she mentioned that this was more an experiment than a full-fledged tour: “I did it to experiment with a new platform that I saw others having a lot of success with. I had used Periscope personally and had a ton of viewers and conversation and likes on my first scope, so I felt comfortable doing it for MIT after first doing it personally.”

The 3-min excerpt of MIT ‘scope below includes the beginning of the tour and one of the most visually interesting parts:

#TourTuesday on Periscope at UW-Madison

After watching MIT’s tour, I decided to look for another example.

I had seen in my Twitter feed that UW-Madison was experimenting with the app as well, so I decided to follow them on Periscope. And, I managed to catch the Periscope notification on my phone just after lunch on a Tuesday.

This is NOT the first (more like #4 or #5) UW-Madison tour done by Robert Welch, Communications Intern at UW-Madison Campus and Visitor Relations Office, but it’s part of a “#TourTuesday” summer series.

“We started these tours in mid-June and have continued every Tuesday since then,” explained Robert in an email. UW-Madison Communications Office helped them setup and plan the first Periscope video, but he has run them autonomously with different student tour guides (Kerry, a journalism major, in the excerpt below) since the beginning.

The 3-min excerpt of UW-Madison ‘scope below includes the beginning of the tour:

Lessons learned from these 2 campus tours on Periscope

Got interesting examples of Periscope uses at your school? Get featured!

I’d like to share more examples of different uses of this experimental platform. I’m NOT looking for campus tours only, but any innovative use for institutional purposes as I’m working on a future column about the topic for University Business.

If YOU are doing interesting things with Periscope, send me a quick note at karine(at)higheredexperts.com as soon as you can.