I briefly discussed the topic in a previous post. But, it’s now time to revisit the question with a series on SnapChat and higher education.

Is SnapChat the next big thing or a fad for #highered marketing? 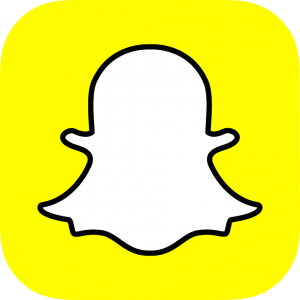 SnapChat (Wikipedia article) has started to get some real traction over the past year. More and more early adopters in our industry started to play with it, following the lead of students as they did before with Facebook, Instagram or Twitter.

New platforms are a fact of life in higher ed communications and marketing.

Facebook was born on a campus in 2004 and college students were the only ones to have access to the platform with their .edu address until 2006.

Logically, many entrepreneurs or venture capitalists try to follow the Facebook playbook by making college campuses or high schools a corner stone of their strategy.

The fact that Mark Zuckenberg tried to buy SnapChat for billions of dollars in 2013 is probably not a coincidence.

Launched in 2011, SnapChat was designed as a visual mobile messaging platform for friends. In a world where every online move is tracked and traceable, the ephemeral character of “snaps” – snap shots disappearing in a matter of seconds once viewed – was a welcome change for teens in search of a new digital hang-out, away from parents and teachers.

After declining the acquisition offer from Facebook, SnapChat launched Stories in June 2014, piloted its geo-restricted version with Campus Stories on a few campuses in October and introduced Discover to showcase content from the editorial teams of selected publishers in January 2015.

Backed by investors and trusted by high-profile news and entertainment publishers, SnapChat is growing up into a serious contender.

What does the data say?

The difference between a toy and a channel is audience adoption, right?

So, let’s have a look at the data from 3 different surveys:

In February 2014, a survey of 1,650 self-identified influential college students from the marketing company (now rebranded as an online community for college students) Sumpto found that 77% used SnapChat daily. That single data point – often misreported as 77% of college students – was enough to get discussions about the platform started at several universities and colleges. The college students in Sumpto’s database might not be representative of ALL college students as they joined to network with peers and get freebies from brands.

In June 2014, another survey of 7,000 high school seniors using Niche, a college review site, showed that SnapChat made it in the top 4 most popular social media platforms behind YouTube, Facebook and just after Instagram. With 46% of seniors using SnapChat daily, the application share came very close to the 51% of daily users for Instagram.

In October and November 2014, a third survey of 1,611 high school seniors using Chegg – a big player helping students make their college decision among other things- found that SnapChat might not be ripe for admissions prime time with only 21% of students using it for college research, about twice less than Instagram and Twitter. 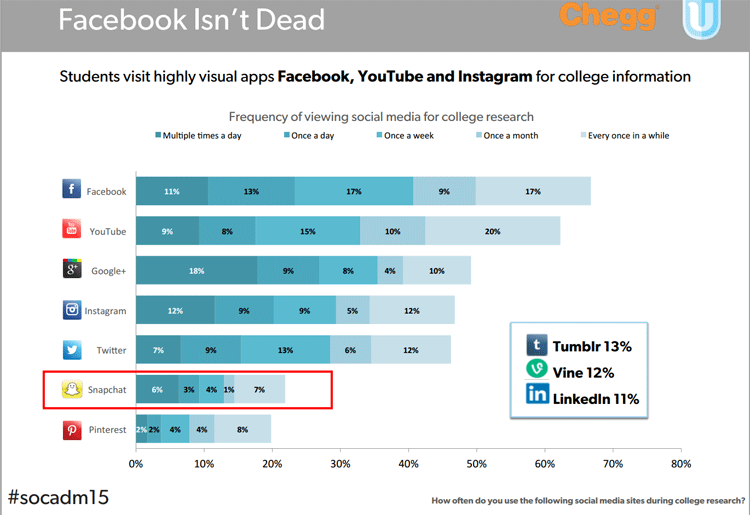 Even this relative counter-performance is a good indicator that SnapChat – only launched in 2011 – may not be a fad.

If 1 out of 5 high school seniors uses SnapChat for college research when only a few institutions are currently active on the platform, it’s probably worth exploring as long as your school is already doing a good job on Facebook, Instagram, Twitter and YouTube.

In the next post in this SnapChat series, I’ll share the first of the interviews I conducted with higher ed professionals using SnapChat with college students. These interviews were done as I was working on my next column for University Business.