A new job for your #highered school mascot?

Everybody is supposed to multitask now, right?

Has Marquette University started a movement?

As reported by Joe Kuffner last month, Marquette University and its official mascot, Golden Eagle, scored big time in January by hand delivering letters of admissions to a few students – and catching the action on camera.

The result was this great “contagious” video (6,949 views at the time of this writing) with all the right elements to become a success.

University Mascots to substitute for USPS or Canada Post?

When Angi Roberts, Information Services Manager in Admission Services at The University of Guelph in Ontario, Canada and one of the students of in my social media marketing for higher ed class, mentioned 2 weeks ago that she spent an evening driving her school mascot, Gryph, to bring admissions letters to a few students, I was sure it was a case of best practices at work.

Good ideas have always been shared, borrowed, adapted and remixed in higher education as institutions are as much different as the needs and expectations of their audiences are similar.

So, I asked Angi if this was the case and if Marquette University was the inspiration. The funny thing is that she didn’t even know about Marquette’s initiative as she explained in an email reply:

“We monitor other institutions’ social media pages, searching keywords such as, admit, offer, university; anything that represents where we’re at in the admission cycle right now (Ontario universities are in the midst of sending out offers now). On February 1, we saw on Twitter that a nearby university was including a hand-written note of congratulations in their offer packages. We joked that we should send our Registrar out to hand-deliver offers, and that snowballed into sending out our mascot.”

I thought it was a nice touch, especially after Canada Post announced a plan to progressively phase out home delivery in big cities to tackle financial troubles…

With social media, timing is the name of the game

At the Univeristy of Guelph, the decision was made pretty quickly to give the hand-delivery-by-the-mascot idea a try.

Angi’s team identified 3 high school applicants in the city of Guelph that had made Guelph their first choice, because they wanted to deliver offers to those who were really serious about coming to Guelph. “One of the households had twins and both were admitted! Double the excitement!” wrote Angi in her email.

The video was posted 5 days after the special delivery, missing the big buzz, but still resulting in 736 views in less than 24 hours.

“The initial post that included a picture of us hand-delivering the first offer of admission was tweeted at 6pm on February 5,” explained Angi. Within a 36 hour period, the picture tweets for all the special deliveries generated 89 favourites, 47 RTs, and 57 new followers.

The posts on Twitter also generated over 50 different independent but related tweets: students asking Gryph to come to their house with an offer. “And from that, it opened the door for multiple conversations with students on Twitter, including those who received an offer, and those still waiting for an offer,” added Angi.

That night, at 10pm, she also posted the photo to a popular current University of Guelph student Facebook page, Overheard at Guelph. In 50 minutes, the post got 958 likes. In 12 hours, 2,277 likes, and 21 comments. The video was also shared on this Facebook page and received 53 likes and 10 comments. 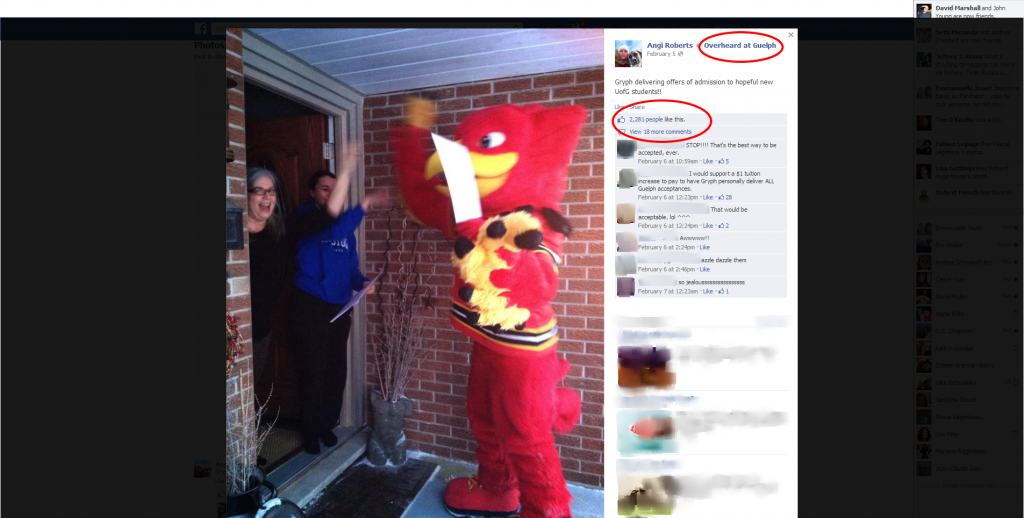 Anybody else used the idea?

I’d like to know if anybody else gave that idea a try. Tell us by posting in the comments if you did.