Unless you haven’t been checking twitter this past few days, you must have heard about the MB Tweet Race that just took place.

As I explained a couple of weeks ago on this blog, Todd Sanders (@tsand) from UW Green Bay took part in a social media campaign orchestrated by an automaker, a real race – between 4 teams riding real cars across America – powered by twitter fuel provided by supporters and friends. Todd and John WON this race (results have been announced at 4PM ET) – even though they were seen as the underdogs in terms of followers. They are not celebrities, don’t have sexy figures and aren’t considered to be major tech influencers.

So, how did this happen?

These are the 5 lessons I was able to draw from my experience as a higher ed observer and a humble participant:

While web virality and social media success cannot be just copied and pasted, these are definitely lessons that can help guide the social media campaigns of your institution.

I believe the #MBteamS formula can work for universities and colleges because most of our target audiences and constituents shared community-building real-life experiences – they went (are going to) college together after all. 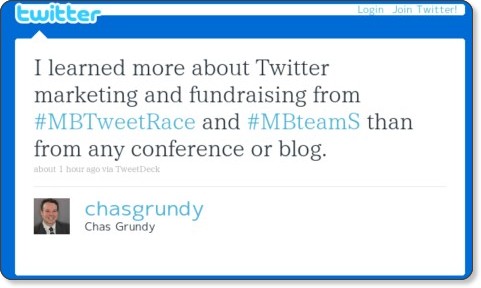 Michael Stoner has shared what he learned on his blog.

Any other ideas or feedback? Please share with the rest of the class by posting a comment!