This post is #9 in a series of 10 to celebrate the 10th anniversary of this blog while looking back at the past decade in higher ed digital marketing and communications.

10 years of YouTube and online videos in higher ed

Yep, YouTube is actually younger than Facebook – by a year. Now with a billion users worldwide, YouTube is also younger than this blog — by 2 days. It was launched on February 14, 2005 (nice revenge of the geeks, I guess) and bought by Google a year later.

Back in 2005, when I started to write about marketing and communications in higher education, institutions used video mainly on television – for advertising. 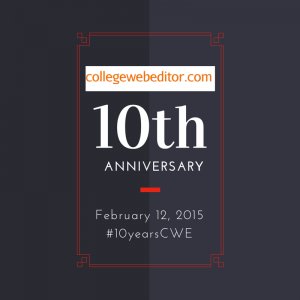 The rise of YouTube and the explosion of online videos have totally changed the deal over the past decade in higher education and elsewhere.

Many institutions didn’t embrace online videos right away. And, they were afraid of – sometimes with good reasons as you can see in this post I wrote in May 2006– user-generated videos.

Production costs were high, staff expertise in the domain was rare and bandwidth use was billed as any other scarce commodity.

With the growth of cloud computing, the multiplication of broadband users and the launch of affordable small yet powerful video cameras (like the Flip cam – and later the iPhone camera), the use of online videos became a possibility for many institutions.

All these factors – along with the fact that targeted audiences have always loved it – explain why online video has become an important asset, today, in the toolbox of any higher ed marketer or communicator.

If a picture is worth 1,000 words, it takes at least 6 digits to measure the worth of a video.

Our brains process pictures differently, and moving pictures are the most effective ones.

That’s also the reason why Facebook has recently been pushing so hard its users to upload videos on its platform – and not on YouTube.

10 videos that marked the past decade in higher ed

Going through the archives of my Higher Ed TV blogging series, I’ve made this selection of 10 interesting videos from higher education. I chose videos that were representative of a genre or very successful.

If you want more context, you can access the post I wrote for each of these 10 videos by clicking on its title just before its publishing date.

RealNebraska (2006) from UNL with David Burge

The Undergraduate (2006) from the University of Florida

The Machine is Us/ing Us (2007) from KSU Professor Wesch

The Science of Watchmen (2009) from the University of Minnesota.

It’s a Snap (2012) from Central Institute of Technology