Social Media TOS Tuesday: How to run a #highered Twitter contest without any trouble

Ah, contests on social media platforms… Nothing like a contest to generate some tweets, right?

They are a great tool to increase engagement (the promise of a prize is a powerful motivator) without breaking the bank (only a few prizes will help engage many hopeful participants).
Since the beginning of times (well, almost), contests, sweepstakes and other similar tactics have been a core promotional and marketing tactic.

This is the reason they are usually regulated. Got to have some rules to protect the many, right? With social media low barrier of entry, it’s not surprising they are so popular in general as well as in higher education.

Your first time coming across a Social Media TOS Tuesday? Read this first! 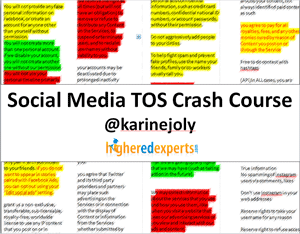 In my Social Media TOS Tuesday posts (that Iâ€™ll update if any change happens), Iâ€™m addresssing some of the points I see most often infringed in higher education as well as any specific questions you might have about what you can or canâ€™t do as a social media professional according to the terms of service (TOS) of the main platforms.

Iâ€™m not a lawyer (so, never consider what I post as legal advice :-) the previous line is part of the TOS of this blog ;-), but I read what nobody does â€“ the TOS! â€“ to prepare a presentation I will give for the last time this year at the High Ed Web conference in Buffalo, NY next Monday: Social Media TOS Crash Course.

Twitter has set up some very simple guidelines for anybody who wants to run a contest on the platform.

The goal of these guidelines is to make sure people taking part in a contest aren’t pushed to abuse the platform and its community of users. Twitter doesn’t want contest participants to be enticed to break its terms of service (TOS) to satisfy their burning desire to win the contest or to fulfill the obessive yearning of the contest organizers for more engagement ;-)

So, if your school runs a Twitter contest, make everybody’s life simpler by following these guidelines!

2 things to do before running a contest on Twitter

The essence of a contest requires some rules to be set. So, everybody can understand 1) what needs to be done to get a fair chance to win and 2) how the winner will eventually be selected.