While the news was announced through a very formal press conference held last Tuesday morning, President Schulz didn’t quite follow the University President PlayBook when it comes to communications around bad news or crises. You know what I mean –sticking to traditional news outlets and keeping a distance with unhappy fans and mean critics. No, President Schulz didn’t dodge the ball He caught it in mid-air and scored in a very refreshing, authentic and human way by… using Twitter to engage with them directly in real time.

Just look at a couple of his tweets:

With more than 8,000 Twitter followers and 2,300 tweets under his belt, K-State President is NOT the new or clueless kid on the Twitter block.

If you take a few minutes to go over his tweets (@kstate_pres), you’ll see that he knows how to reply, retweet and post to engage his followers. 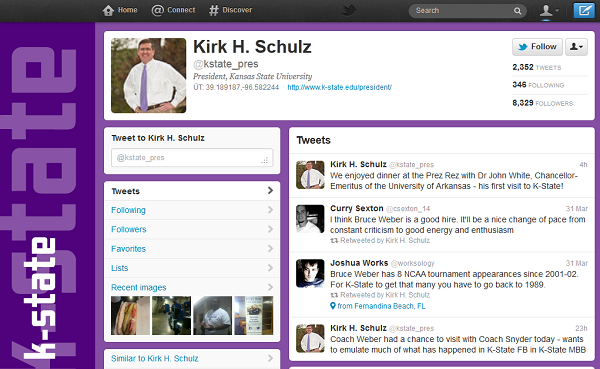 Choosing what to retweet is also something he does very well as shown below.

I’m sorry @John_Currie @kstatesports @kstate_pres for how I reacted earlier. I really do support you guys and your choices. #Emaw #KState

So, when Bill Herndon, Director of Web Services at K-State emailed me about this last Tuesday, I asked right away – following the proper channels – if President Schultz would answer a few questions so we can all understand why he chose Twitter in this specific instance. I got my short email interview back the same day just a few hours after my initial request (so, K-State President is pretty good with email as well).

Twitter allows for immediate feedback and interaction with many members of the K-State alumni base – including sports media. Since people had posted items which I thought were not correct, I wanted to provide some real time dialoging opportunities for people to ask about things associated with athletics. I also felt it was appropropriate to tackle some of the more aggressive questions and not try and dodge difficult issues related to our basketball program.

2) You seem to be very active on your Twitter account. Are you the only one managing your Twitter presence or do you get help from staffers?

I do manage my account by myself, and do 95% of it on my iPhone. I can do a Twitter posting from virtually anywhere and at anytime – which means I can do it between meetings. Also, by doing it myself my Twitter postings are reflective of my personality – as opposed to “corporate twittering” which is often simply posting weblinks.

3) What would you say to other university/college presidents who are still hesitant to embrace Twitter as a communication channel?

I would encourage them to embrace Twitter and Social Media – which is here to stay! I believe that often people don’t know what Presidents do with their time – and this also allows a larger group of people to keep attuned to what their President is doing to advance the university.