CSU uses Twitter to power dynamic updates on a… billboard

A few institutions have used Twitter to broadcast text updates to mobile phones (I remember writing in one of my UB columns about Allegheny College distributing this way updates about orientation). However, this is the first time I’ve heard of a university marrying the old and the new by broadcasting updates from its Twiter account to a digital billboard on a highway as John Strubel, Director of Integrated Marketing at CSU, announced a few days ago in an email:

“Charleston Southern University is the first business and only athletic program in the Charleston, South Carolina market to incorporate live in-game college football updates using Twitter. The updates appear on the digital billboard on I-26 East at Aviation Road and will air every week during CSU home games.”

Intrigued by this new twist, I asked John Strubel a few questions via email to learn more about this initiative.

1) Can you tell us how it’s done? Do you actually just tweet to your regular account or did you create a special one for the billboard?

First, the feed is scheduled to run between 1-6pm on Saturdays (during home games only). The remaining hours of the day we have a unique billboard that promotes @csusports Twitter feed for live in-game updates (this can also be coordinated for other events and academic promotions).

As for the tech aspect, the server hosting the digital billboard follows our Twitter feed and updates as our sports information director sends a tweet from the press box. The only requirements we place on the feed during the game are: No links and keep the posts as short as possible. 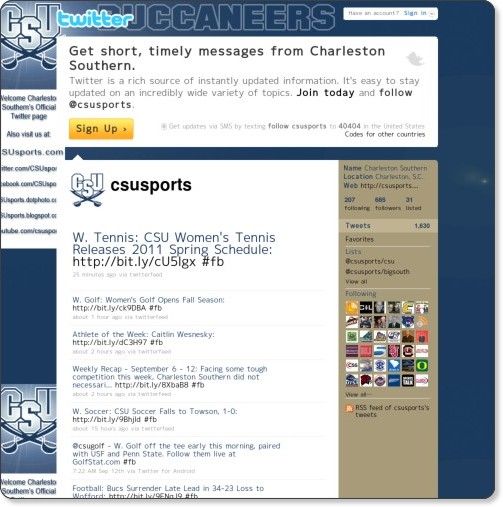 2) Do you have any way to know how many people see these updates?

This is the highest traffic area in Charleston, South Carolina. It is called “the parking lot” due to heavy traffic swells. More than 90,000 impressions daily, including 450 views per hour (our board is in rotation with five others).

3) What kind of feedback have you received up until now?

The feedback has been incredible for two reasons: We’re in a competitive athletic market (and region) and, two, we’re the first business to jump into this marketing model. There was a lot of unsolicited chatter from advertisers, fans and alumni in the press box and tailgate party prior to the game.

What do you think?